A career of distinction

I became interested in snakes, venoms, antivenoms and snakebite envenoming as an undergraduate student in Microbiology at the University of Costa Rica, back in 1975, when I started working as a research assistant at Instituto Clodomiro Picado (ICP). Soon I realized how fascinating are snakes and their venoms and how profound is the impact in human suffering caused by snakebite envenomings. This motivated me to devote my professional life to the study of venoms and antivenoms and to the search for solutions aimed at reducing the burden of this neglected tropical disease in my own country and elsewhere.

Having worked in close coordination with our ministries of health and foreign policy has been a highlight in my career, as this partnership allowed our country to project its experience in snakebite envenoming to the global arena.

In the first stages of my career at ICP, and during my graduate studies in the USA, I became interested in the experimental analysis of the local tissue damage induced by viperid snake venoms, particularly by the venom of the terciopelo (Bothrops asper), the species causing the majority of snakebites, and the most severe ones, in Central America.   In collaboration with colleagues and students at ICP and many other groups from several countries, we manage to isolate and characterize the toxins causing myonecrosis and hemorrhage. We investigated their chemical structure and mechanisms of action. After several decades of work, these and other studies have enabled the understanding on how viperid venoms inflict such prominent local tissue damage which may result in permanent sequelae. We have also searched for novel inhibitors of these toxins which could be eventually used to reduce this aspect of venom-induced pathology. In 1983 I became a member of the International Society on Toxinology (IST). Many studies carried out by our group have been published in Toxicon, the official journal of the IST. 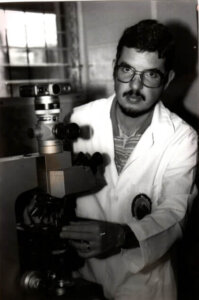 José at Instituto clodomiro Picado, circa 1990.

When I was appointed director of ICP, back in 1988, I became involved with the production and quality control of antivenoms, since this is a central topic in the work of our institution. We developed a set of laboratory techniques aimed at the preclinical evaluation of antivenom efficacy. With these tools, we and others have assessed the preclinical efficacy of many antivenoms manufactured in Latin America and elsewhere. In addition, our group at ICP has contributed to the improvement of the technology for antivenom production, especially by adapting in the 1990s the use of caprylic acid in the purification of horse antivenom antibodies, a technique that is being used by several laboratories in the world.

José María (right) with Dr. Reina Teresa Velázquez from the Secretary of Health of Honduras during a hospital visit in 2018.

ICP has always had a social commitment to bring the knowledge it generates to the rural communities and health professional groups. I have been involved in these extension programs, a highly rewarding aspect of our work. The engagement of communities is a central aspect in the global struggle to reduce the impact of snakebites. On the basis of the experience developed by ICP in Costa Rica, our group expanded its contribution to other countries in Latin America, the Caribbean, sub-Saharan Africa, Asia, and Papua New Guinea. In addition to establishing fruitful research collaborations with many groups, ICP has developed antivenoms for these regions, and has provided advice to health authorities and other stakeholders.

One of the most rewarding experiences for our group has been the development and production of a polyvalent antivenom for sub-Saharan Africa, the EchiTAb-plus-ICP, a collaborative project initiated through a partnership with colleagues of Nigeria and the UK and then expanded at ICP. This antivenom is currently being distributed and used in several African countries. Likewise, we have been involved in regional cooperative efforts in Latin America that led to the establishment of a regional network of public antivenom manufacturing laboratories, with the coordination of the Pan American Health Organization (PAHO). This has enabled a close cooperation of mutual benefit between institutions in the region.

Since 2008 I have been member of the Board of Directors of the Global Snakebite Initiative (GSI), an organization that has played a key role in the global efforts to raise attention to the problem of snakebite envenoming. Working with my fellow colleagues of the GSI has been highly stimulating and a great learning experience. 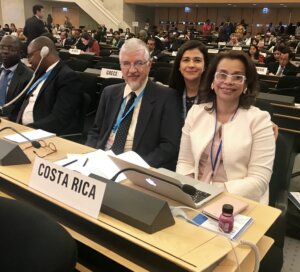 José María (leftt) at the 2018 World Health Assembly in Geneva, when the resolution on snakebite envenoming was approved. In the photo with Costa Rican ambassadors Gaudy Calvo (center) and Elayne Whyte (right).

More recently, I was directly involved in the efforts promoted by the government of Costa Rica, together with governments of many countries, several non-governmental organizations, and the research community of toxinologists, to raise the global awareness on the high impact of snakebite envenoming, and on the need to generate an integrated global strategy to confront it, led by the World Health Organization and its regional offices. The experience of having worked in close coordination with our ministries of health and foreign policy, and with many other stakeholders, has been a highlight in my career, as this partnership allowed our country to project its experience in snakebite envenoming to the global arena. The resolution adopted by the World Health Assembly in 2018 and the launching of the WHO strategy for the control and prevention of snakebite envenoming in 2019 constitute great collective achievements.

Finally, I must say that, along the way, I have been highly fortunate to work with so many great people with whom I have shared the dream of using science and technology generated in our countries to reduce the dramatic human suffering caused by snakebites. To use science, technology and politics for the well being of the people affected by this terrible neglected disease. I hope to continue contributing to achieve these goals in the future, working together with many people in Costa Rica and abroad.